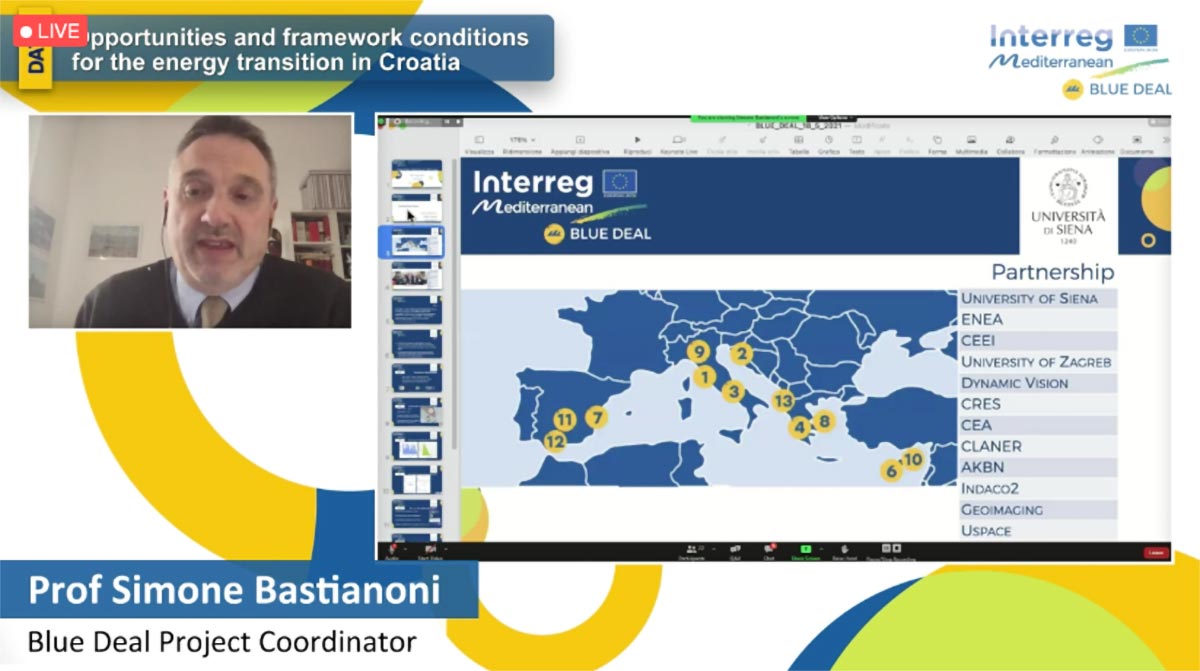 Marine renewable energies are booming. Since the European Union defined its targets for reducing greenhouse gas emissions and increasing the share of renewable energy and energy efficiency by 2030, the future of blue energy has been on the table.

In order to help achieve these targets, the BLUE DEAL project is conducting a series of Transferring Labs to analyse the current situation of marine renewable energies, the different technologies available and their deployment possibilities. In this case, all this analysis has been carried out around the future of these technologies in the area of Croatia and specifically in Splitz.

Over the course of 4 days, 30 speakers specialising in the sector and more than 200 people from 12 countries participated, both online and in person, in this hybrid event.

Martin Bućan, Split-Dalmatia County stressed the importance of preserving the environment and the ecosystem and that it is “crucial to make major changes in the domestic sectors”, which is also an investment opportunity. In this sense, Alessandra Sensi – Union for the Mediterranean also stressed that “it is necessary to ensure the integral development of all economic actions in the MED area”.

The second day focused more on the analysis of the different resources and technologies that could be installed after analysing the potential of the area taking into account the challenges posed by the existence of Posidonia and the shipping routes that delimit the possible pilot areas. Professor Goran Krajačić commented that “Croatia has sustainable local action plans and Act for Smart Islands”. The investigation of the various devices also revealed the potential of wave energy and offshore wind turbines as well as the possibility of creating hybrid platforms to harness the various resources. “The offshore wind potential shows a great perspective for achieving energy independence and increasing the share of renewable energies. Split-Dalmatia County could lead the BE sector in Croatia”. stated Hrvoje Stančin – UNIZAG FSB.

Throughout this session, the 3D visualisation tool developed by the project, which allows, by interacting with it, to see how the coastline of the coast would look like if the different types of devices were implemented, attracted particular attention.

As part of the strategy to promote this type of energy, on the third day BLUE DEAL presented a series of 12 Open Innovation Challenges aimed at promoting the supply and demand of services based on innovation and knowledge in the Blue Energy sector. Companies wishing to present their solutions to these challenges can do so through the platform https://bluedealmed.eu/.

In addition, throughout the day, some pilot projects and case studies were also presented, showing the success achieved after the implementation of these technologies.

Blue energy is the future of renewable energies and that is why it is important to train new generations. For this reason, the last day of the event was devoted entirely to working with different schools and public authorities responsible for the education system, to introduce them to the Blue Deal School Competition and to increase cooperation.

This event was co-organised by the Interreg MED BLUE DEAL modular project and the BLUE GROWTH horizontal project.

BLUE DEAL is a European project made up of 12 partners from 6 Mediterranean countries and co-financed by the European Regional Development Fund and the Instrument for the Pre-accession Assistance Fund, with a budget of 2.8 million euros.