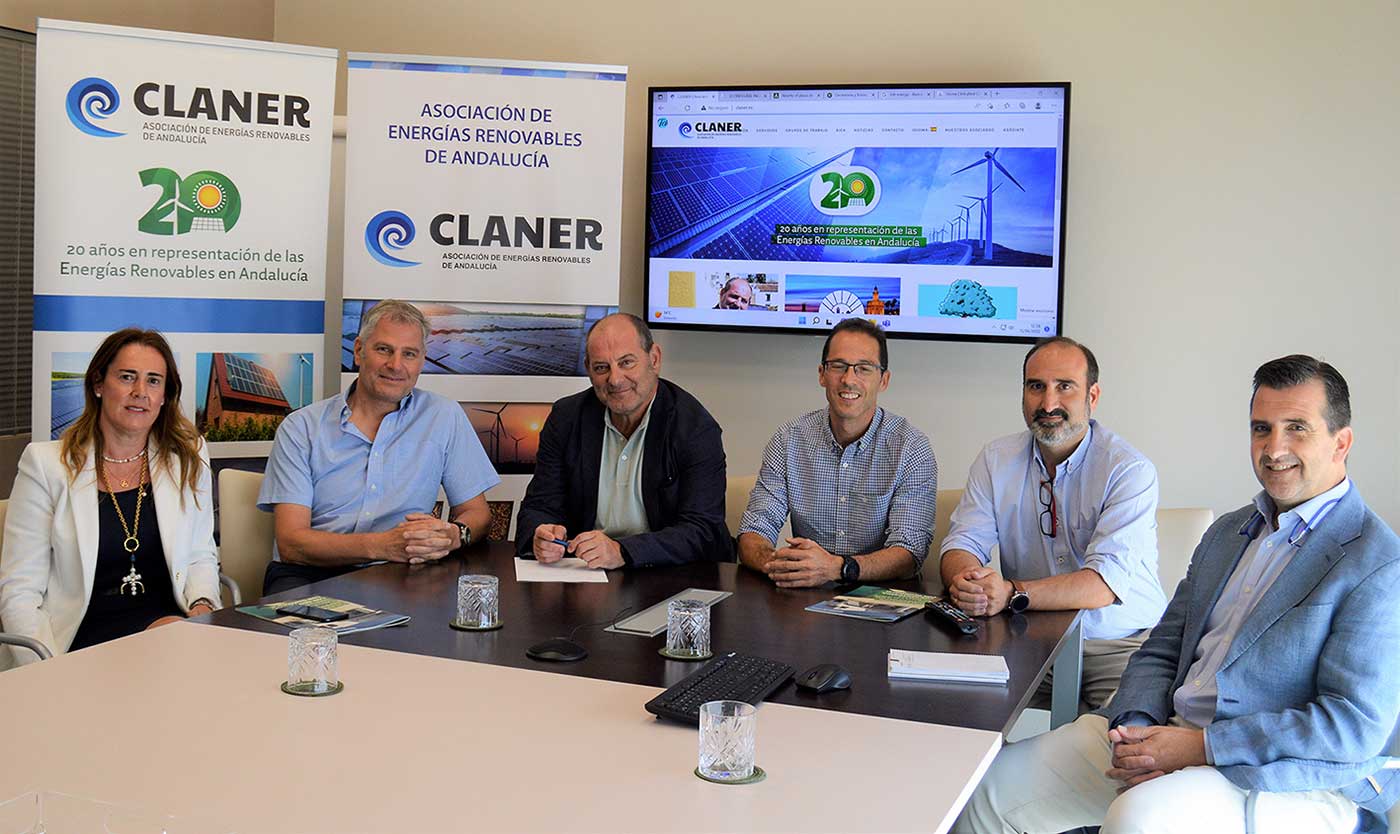 The Andalusian Renewable Energy Association (CLANER) has set up a working group dedicated to geothermal energy with the aim of promoting the development of this technology in our community by improving its social awareness, coordinating initiatives that respond to the sector and acting as an interlocutor for companies in terms of policies and regulation of this clean energy.

The act of constitution of the new working group, whose delegate is Lorenzo Martínez, CEO of the company Geointegral, was held in the presence of the president of CLANER, Alfonso Vargas, and representatives of companies involved in this technology in Andalusia.

Geothermal energy is stored in the form of heat beneath the Earth’s solid surface, whether in rocks, soils or groundwater. This energy can be harnessed in many different ways, such as its use in individual homes, residential homes or industries for thermal generation – heating and cooling – through the installation of a heat pump and a geothermal collector.

The possibilities of using geothermal energy include, among others, heating in winter, cooling in summer, domestic hot water and heating of swimming pools for any type of building.

The new Geothermal Energy area within CLANER aims to promote this technology in our community which, although it currently represents a very small percentage (around 1 percent) of the total installed capacity for air conditioning in Andalusia, in the short and medium term it could become the first option in the residential sector.

In Spain there are more than 3,500 geothermal installations with an installed capacity of 25,000 kW, having experienced a 30 percent growth over the previous year, which shows the great potential for development of this renewable source that does not emit CO2 as it does not need to burn fuel for air conditioning.

The sectors that use the most geothermal energy in Spain are residential (84 percent), public buildings (11 percent) and industry (5 percent). In recent years, the number of jobs in the sector has tripled, with 83 percent of the employees having an intermediate qualification.

In Andalusia, there is significant geothermal potential for air conditioning and cooling throughout the region. For this reason, this technology has a very promising future and is in a phase of full expansion, with installed capacity doubling every year.

The current capacity existing in Andalusia to satisfy cooling and heating production demands with geothermal installations amounts to 10,383 kW, with an estimated renewable contribution of 600 tonnes of oil equivalent (toe), according to the latest data published by the Andalusian Energy Agency.

CLANER’s Geothermal Energy area is open to all companies in the sector that wish to join in order to promote the development of this technology in Andalusia, as one of the renewable energy sectors with the greatest future and potential, and to be able to carry out a coordinated representation of their interests.

The Andalusian Renewable Energy Association (CLANER) was set up in February 2012 as a group of companies, official bodies, technology and research centres, universities and public foundations, among other agents.

Among the members of the association, which currently has more than a hundred member entities and represents more than 90 percent of the Andalusian renewable energy sector, are Andalucía Tech, the Centre for Energy, Environmental and Technological Research (CIEMAT), part of the Ministry of Economy and Competitiveness, the University of Jaén, the Pablo Olavide University in Seville, the Descubre Foundation, municipal and provincial energy agencies, as well as the main renewable energy companies in Spain and the electricity company Endesa Distribución.

For further information or to arrange interviews with CLANER’s management, please contact its Communication Department on 676 46 57 00; 951 910 401 or comunicacion@claner.es