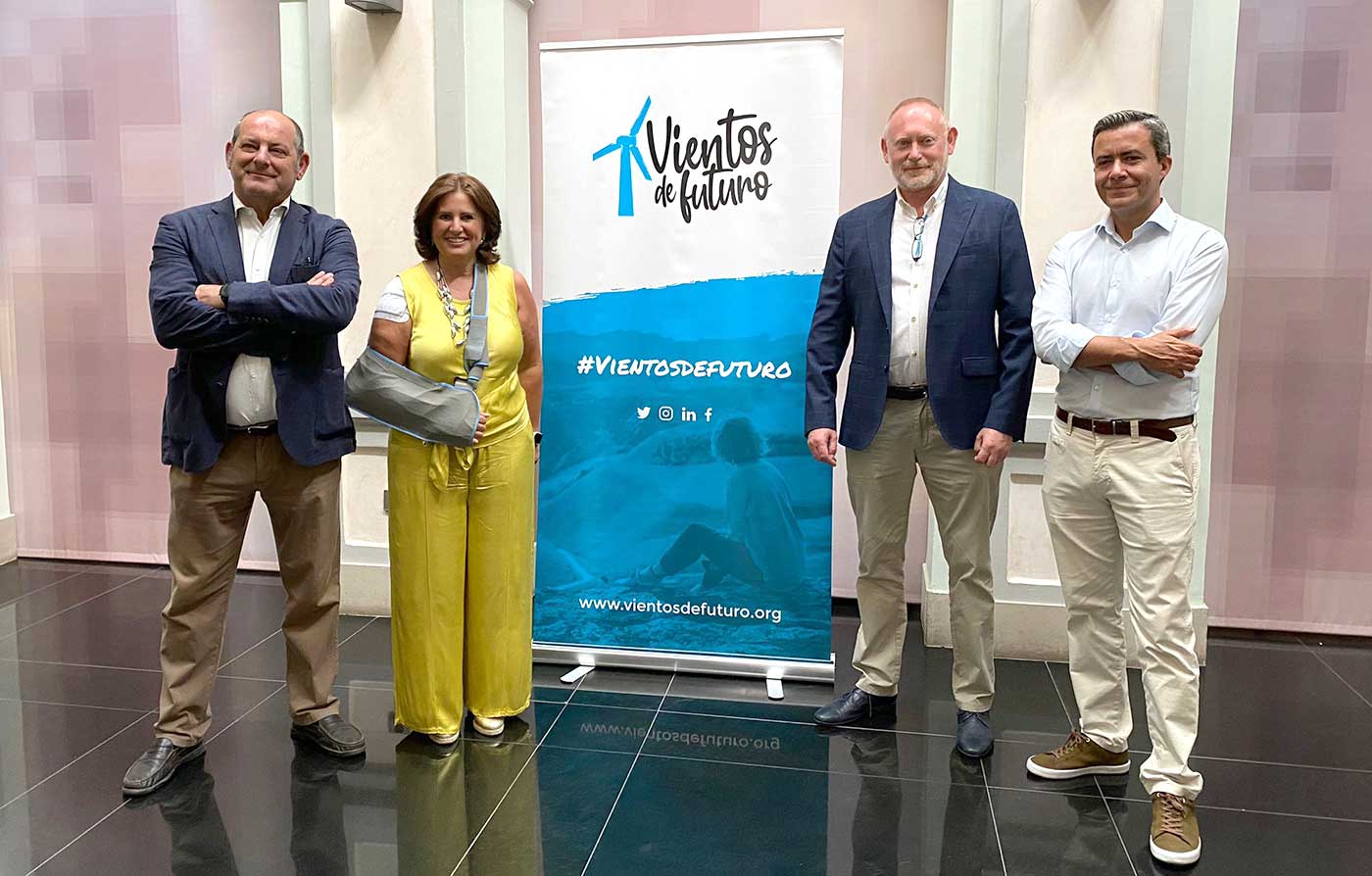 The president of the Andalusian Renewable Energy Association (CLANER), a leading organisation in the renewable energy sector in the region, Alfonso Vargas, participated this morning in the presentation ceremony in Andalusia of the collaborative movement “Vientos de Futuro”, which vindicates the importance of wind energy as a commitment to the future and seeks to promote its development in Spain.It also aims to contribute to achieving the objectives set for 2030 in the National Energy and Climate Plan (PNIEC) approved by the Government and to respond to the European objective of achieving climate neutrality by 2050.

During the event, held in Seville, different spokespersons of the movement took part, such as Alfonso Vargas himself, the campaign spokesperson for Winds of the Future and sustainability expert, Carlos Martí, the president of NESI Forum, the third sector organisation behind Winds of the Future, Diego de la Moneda, and the president of the Andalusian Association of Women Entrepreneurs in the Environmental Sector (ANSEMAC), Esperanza Fitz, who presented their points of view on the situation of wind energy in Andalusia and highlighted the potential of this region to maintain the development of clean sources.

The president of CLANER, Alfonso Vargas, highlighted the relevance of wind energy at present, given that “we are at a crucial moment to bet on the generation of employment and green industry in Andalusia. Wind energy is an opportunity that all citizens and organisations should take advantage of, and that is why it is so important that we join Vientos de futuro and open a healthy and tolerant debate”.

“Andalusia has a key role to play in the development of wind energy, as it has privileged orographic conditions for the operation of wind farms that allow Andalusians to be less dependent on other energy sources. At Vientos de Futuro we are convinced of the region’s potential, of its capabilities and possibilities to consolidate wind energy as the main sustainable source of energy generation in the community,” said Carlos Martí, spokesperson for the movement.

The organisers stressed that in the context of the current energy crisis, caused mainly by the war in Ukraine, it is necessary to promote the production and use of other energy sources in order for our country to be as self-sufficient as possible. In this sense, it is necessary to highlight that Andalusia is a region capable of offering a high yield in terms of renewable energies.

The Energy Data of Andalusia report, produced by the Andalusian Energy Agency in 2020, indicates that the gross production of renewable electricity accounts for 51.1% of the total energy generated in the Andalusian autonomous community, with almost half of the total renewable energy produced, more than 44.8%, corresponding to energy generated in wind farms. Therefore, of the total energy produced in Andalusia, wind energy accounted for 7,230.33 GWh in 2021, i.e. 18.24% coverage of total electricity demand.

According to the objectives of the PNIEC 2021-2030, electricity generation by wind power should reach 35% by the end of the decade – up from the current 23% – which requires a doubling of wind power capacity so that 74% of electricity is renewable by 2030. Andalusia currently has 30 industrial centres and 163 wind farms, making it the fifth largest autonomous community in the country, and therefore the fifth community with the most installed capacity, with 3,521.95 MW and a market share of 13%.

Wind energy, a driver of socio-economic development and employment

The growth capacity of wind energy in Andalusia leads to socio-economic growth in the region. The figures reflect this, as wind energy generated 880 direct jobs in 2020 alone, making it the eighth autonomous community with the highest number of wind energy jobs generated in 2020.

In addition, Andalusia is the fifth community in Spain that contributes the most GDP, in terms of wind energy, with 177 million euros in 2020, 9.9% of the national total and is part of the top five Autonomous Communities that contributed the most to GDP in 2020, being 65% of the total between the five.

“It is clear that the generation of employment and economic momentum in our autonomous community depends on the promotion and development of wind energy. It is essential that Andalusian town councils and municipalities facilitate, as far as possible, the implementation of new wind farms”, explained Esperanza Fitz, president of ANSEMAC.

On the other hand, Diego de la Moneda, president of NESI Forum, the third sector organisation behind Vientos de futuro, highlighted “the importance of wind energy for the preservation of the environment, as wind energy in Andalusia avoids the emission of more than 3 million tonnes of CO2 per year, equivalent to the CO2 generated by one million cars per year, almost the total number of vehicles in Malaga or Seville”.

The promoters of the initiative advocate sustainable wind power development in Andalusia, compatible with the environment and the protection of biodiversity, in a model of coexistence between wind power and other fundamental activities for local development, such as livestock farming, agriculture and tourism. The collaborative process of Winds of the Future will crystallise in a Manifesto, which will reflect the main commitments made by the driving entities and member organisations.

On the website www.vientosdefuturo.org, citizens will be able to learn more about the reality of wind energy in our country and discover the potential offered by this energy source, through various informative materials, news and information on the campaign.

About Winds of the Future

Winds of the Future is a collaborative movement that vindicates the importance of wind energy as a commitment to the future, and that seeks to promote its development in Spain through listening, dialogue and dissemination. This initiative is driven by the Spanish Wind Energy Association (AEE), Talent for Sustainability, the Foundation for Climate Research (FIC) and New Economy and Social Innovation (NESI).

It is the voice of the wind energy sector in Spain, with more than 250 associated companies. Its main objective is to promote the growth of wind energy through research, communication and education.

The Global Hub for the Common Good Foundation is a non-profit organisation known by the brand NESI, “New Economy and Social Innovation”, which seeks the co-creation of a new, more sustainable, fair and collaborative economy, which provides solutions to social and environmental problems, at the service of people and the planet.

The Renewable Energy Association of Andalusia (CLANER) is the reference organisation for the sector in the region. Its aims, among others, are the management, representation, defence and coordination of the common interests of its members, for the promotion and encouragement of research, technological development and innovation (R+D+i) of products, processes and services associated with renewable energies, all through collaborative stimulation.

Andalusian Association of Businesswomen in the Environmental Sector (ANSEMAC)